Melanie Mark was appointed Minister of Advanced Education, Skills and Training on July 18, 2017. A lifelong champion of children, youth and her community, she was elected MLA for Vancouver-Mount Pleasant in 2016 and re-elected in 2017.

Melanie is Nisga’a, Gitxsan, Cree, Ojibway, French and Scottish and a proud mother of two girls – Maya and Makayla. 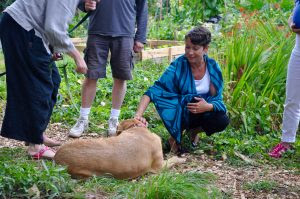 She is the first female First Nations Member of the Legislative Assembly of British Columbia and subsequent Cabinet Minister.

Growing up in the projects of East Vancouver, Melanie’s efforts to overcome adversity shaped her personal beliefs and professional career. For eight years, she travelled throughout British Columbia while working as an Advocate at the Office of the Representative for Children and Youth – an independent office of the legislature serving one of the province’s most-vulnerable populations.”

A believer in the power of post-secondary education, Melanie holds a Bachelor of Arts degree in Political Science and a minor in Sociology from Simon Fraser University, as well as a Criminology Diploma from the Native Education College / Douglas College partnership. She holds an Advanced Executive Certificate in General Management from the Queen’s University School of Business in Kingston, Ontario.

With family ties to Northern British Columbia, Melanie has advocated for her community and has volunteer experience for multiple community organizations like Big Sisters and the Urban Native Youth Association. She co-founded the Vancouver Aboriginal Community Policing Centre, worked with the Native Courtworker and Counselling Association, Covenant House Vancouver and was the National Aboriginal Project Coordinator with Save the Children Canada’s Sacred Lives project.

In 2015, Melanie received the Chief Joe Mathias Leadership Award from the Native Education College, and in 2006, received the YWCA Vancouver Young Woman of Distinction Award.